“One of the things that’s actually very interesting to me about that is that, one, nitrate stock can do that, so it’s just a neat, cool, practical aspect. But I like the idea that it’s the power of cinema that fights the Nazis. But not even as a metaphor – as a literal reality.”
―Quentin Tarantino summarizing the film[1]

Quentin Jerome Tarantino (/ˌtærənˈtiːnoʊ/; born 27 March 1963) is an American film director, screenwriter, producer, and actor. His films have been characterized by nonlinear storylines, satirical subject matter, and an aestheticization of violence that often results in the exhibition of neo-noir characteristics. Tarantino has been dubbed a "director DJ," comparing his stylistic use of mix-and-match genre and music infusion to the use of sampling in DJ exhibits, morphing a variety of old works to create a new one.

A dummy of Tarantino appeared in the second chapter from Inglourious Basterds as the first body being scalped by The Basterds.

In the fifth chapter, Tarantino's hands are the ones that strangle Diane Kruger's character in the close-up shots.

In the German propaganda film-within-a-film, "Nation's Pride", directed by Eli Roth, Tarantino voices an American soldier, who says, "I implore you, we must destroy that tower!". 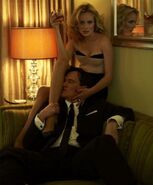 Add a photo to this gallery

Retrieved from "https://inglouriousbasterds.fandom.com/wiki/Quentin_Tarantino?oldid=11977"
Community content is available under CC-BY-SA unless otherwise noted.