“There was a casting audition in France and he had a shortlist of people he wanted to see and he organized a sit down for half an hour. That's the way he auditions people, chatting one-on-one before doing an audition. We start talking about his acting experience, the fact that he wanted to be an actor and he became a director, and he told me that at some point he realized he would never act for the directors he idolized because they were mostly dead. Then I talked about my story, wanting to be a director and ending up acting. Two hours passed by and we hadn't even done the audition together.”
―Jacky Ido on how he got the role[1]

Jacky Ido (born 14 May 1977, in Ouagadougou, Burkina Faso) is a Burkinabe-born French film actor. His first role was as Lemalian in the 2005 German film, The White Masai. He is best known to English-language audiences for his role as Marcel, the film projectionist in Quentin Tarantino's 2009 film, Inglourious Basterds. He also had a short cameo as a slave in Tarantino's next film, Django Unchained (2012). Since then he appeared in many French and American TV series and films. 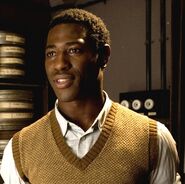