Edit
watch 01:36
We're Getting Mutants in the MCU - The Loop
Do you like this video?
Play Sound

Inglourious Basterds is a 2009 war film written and directed by Quentin Tarantino and starring Brad Pitt, Christoph Waltz, Mélanie Laurent, Michael Fassbender and Eli Roth. The film tells the fictional alternate history tale of the unwitting convergence of two independent plots to assassinate Nazi Germany's political leadership, one planned by a young French Jewish cinema proprietor, and the other by a team of Jewish-American soldiers led by First Lieutenant Aldo Raine.

The film is set in an alternate history of the Second World War in which the entire top leadership of Nazi Germany, namely Hitler, Göring, Goebbels and Bormann attend a film premiere in Paris celebrating the exploits of a German sniper who had managed to kill 300 American soldiers in Italy. The time frame of the film is set in early June 1944, after the D-Day landings but before the liberation of Paris. The film tracks the separate attempts to kill Hitler by two disparate forces, one being "The Basterds", a motley crew of Jewish American soldiers out for revenge against the Nazis. The Basterds have a modus operandi whereby each man must cut off the scalp of a dead Nazi soldier, with orders to get 100 scalps each. The Basterds allow one German soldier to survive each incident so they can spread the news of the terror of their attacks. However, the Basterds carve a swastika into the forehead of that German. The other force concerns Shosanna (Mélanie Laurent), the only Jewish survivor of an attack led by SS-Standartenführer Hans Landa, also known as the "Jew Hunter" that had killed all her family. The Basterds and Shosanna remain unaware of each other throughout the film.

Chapter One - Once upon a time... in Nazi-occupied France[]

The film opens in 1941 with Colonel (Standartenführer) Hans Landa, (Christoph Waltz), of the Waffen-SS, proudly known as the "Jew Hunter", interrogating Perrier LaPadite, a French dairy farmer, over rumors that he had been hiding a Jewish family, the Dreyfuses. Landa manages to break down LaPadite and locates the hiding place of the Jews underneath the floorboards. He orders his soldiers to fire into the floorboards in order to kill the Jews. Shosanna Dreyfus, manages to escape unharmed (but covered in blood) and runs in horror. Hans Landa spares her life and lets her flee.

In the spring of 1944, 1st Special Service Force Lieutenant Aldo Raine (Brad Pitt) recruits eight Jewish-American soldiers for a mission behind enemy lines, telling them they each owe him 100 Nazi scalps and will take no prisoners. The "Basterds" become so feared, Adolf Hitler (Martin Wuttke) personally interviews a soldier, Butz (Sönke Möhring). Butz relates how his squad was ambushed and how his Sergeant was beaten to death with a baseball bat by Staff Sergeant Donny Donowitz (Eli Roth), the "Bear Jew" (feared as Golem by the German soldiers), when the Sergeant refused to divulge information. Butz survived by providing the information, but Raine carved a swastika into his forehead with his knife.

Shosanna is later seen in 1944, when she assumes the identity of "Emmanuelle Mimieux". She had also become the proprietress of a cinema, which is chosen by Frederick Zoller (Daniel Brühl) as a premiere for his film, a spotlight-hungry sniper-turned-actor whose exploits are celebrated in the Nazi propaganda film, "Stolz der Nation" ("A Nation's Pride"), as the setting for the film premiere. Since he feels attracted to Shosanna, he manages to convince Goebbels to hold the premiere in her cinema. Shosanna, however, does not reciprocate his feelings. Shosanna realizes that the presence of so many high ranking Nazi officials and officers provides an excellent opportunity for revenge. She resolves to burn down her cinema using the massive quantities of flammable nitrate film in her storage rooms during the premiere and makes a fourth reel in which she tells the Nazis present of her Jewish identity and revenge.

In the meantime, the British have also learned of the Nazi leadership's plan to attend the premiere and dispatch a British officer, Lt. Archie Hicox (Michael Fassbender), to Paris to lead an attack on the cinema with the aid of "The Basterds" and a German double agent, an actress by the name of Bridget von Hammersmark (Diane Kruger), the brain behind the operation.

Hammersmark arranges to meet Hicox and the Basterds in the basement of a French tavern. Unbeknown to her, however, the night of the rendezvous is also the occasion of a German Staff Sergeant celebrating the birth of his son with his soldier comrades. One of the German soldiers present strikes up a conversation with Hicox and notices that his accent is "odd". An SS officer, Major Dieter Hellstrom, who is in the tavern as well also notices that odd accent. When Hicox gives the wrong three fingered order for whiskies (without using his thumb, a traditional German gesture), the SS officer, confirms his suspicions that they are not German officers. A firefight breaks out in which the British officer and two of the "Basterds" are killed as is everyone in the tavern, except for Wilhelm. Hammersmark survives, but is wounded in her left leg.

Aldo Raine (Brad Pitt), the commanding officer of the Basterds interrogates Hammersmark and decides to continue the operation against the cinema under the guise of Italians as suicide bombers.

Colonel Landa, now a SD officer, is able to retrieve one of Hammersmark's shoes from the scene of the firefight at the tavern and also an autographed napkin which Hammersmark had signed for the Staff Sergeant's son. He approaches Hammersmark and Raine in the cinema lobby and is able to easily see through their disguises, as none, even Raine, can speak any Italian or German. He questions Hammersmark alone and makes her try on the shoe he had retrieved from the tavern. He violently strangles her to death as a traitor and orders the arrest of Raine, and be put in a truck, along with Smithson Utivich.

In the closing stages of the film, Landa reveals himself to be a turncoat. He attempts to reach a deal with Raine's commanding officer via a two way radio in which he proposes to allow the assassination attempt against Hitler and the rest of the Nazi leadership to continue in return for safety, privileges, money, medals and a house for himself. He also reveals that he had planted Raine's stick of dynamite in Hitler's box at the cinema.

Zoller, uncomfortable with the way he is portrayed killing Americans in "Stolz der Nation" and showing regret because of his deeds, leaves the cinema auditorium and makes his way to the projectionist's room where Shosanna is planning her attack. Shosanna's assistant and lover, Marcel (Jacky Ido), is waiting behind the cinema screen ready to set alight nitrate film reels, which are highly combustible. Shosanna is unable to get rid of Zoller, who angrily confronts Shosanna about her behavior. Shosanna then tells Zoller that they don't have much time left and tells him to close the door, leaving him stunned. Zoller, then finally complies and heads to close the door. Shosanna then draws her pistol from her purse and shoots him multiple times in the back, mortally wounding him. Afterwards, in an apparent moment of pity, realizing that Zoller is alive, she rolls him over, and he in turn, mortally wounds her as well and then kills her before he dies himself.

When the fourth reel of the film starts with Shosanna's speech to the Nazis assembled in the auditorium reveals that she is a Jew and that the audience is about to die, Marcel sets the nitrate film alight thus causing a pandemonium in the auditorium. Meanwhile, Donny (Eli Roth) and Omar (Omar Doom) who had been seated amongst the Nazis in the auditorium, ambush Hitler's box and are able to gun down Hitler, Goebbels and the other Nazi leaders. As the cinema is engulfed in flames, Raine's men fire randomly into the crowd, who are attempting to flee. Escape is impossible, as Marcel had earlier locked and barred the auditorium doors. Additionally, the dynamite that was strapped to the Basterd's legs goes off. The cinema is destroyed in the subsequent inferno, killing all inside.

Landa sets off with Raine towards the American lines in Normandy where he intends to turn himself in, as part of the deal he had made with Raine's commanding officer. He surrenders to Raine and hands over his gun. Raine orders Landa to be handcuffed and shoots Landa's driver. The film ends with Raine carving a swastika into Landa's forehead and declaring that it may just be his greatest "masterpiece".

The Basterds (The Americans)[]

Harvey Keitel lends his voice as the Basterds' commanding officer, heard only over the radio in a call to Raine and Landa. According to IMDB, Tarantino is in the film as the voice of an American solider in Eli Roth's "Nation's Pride", and a dummy of him is the first dead nazi scalped in the film, and finally, he is also a fake shemp for Christoph Waltz's hands when he strangles Bridget von Hammersmark. Tarantino originally talked to Simon Pegg about portraying Lt. Archie Hicox, but the actor was forced to drop out due to scheduling difficulties [29] having already agreed to appear in Spielberg's Tintin adaptation. However, Pegg did make Tarantino promise to cast him in his next film.[30] Also, Tarantino originally sought for Leonardo DiCaprio to be cast as Hans Landa, [31] a poetic Nazi colonel targeted by the resistance. The director then decided to instead have the character played by a German actor.[32] The role ultimately went to Christoph Waltz, an Austrian actor who, according to Tarantino, "gave me my movie back."[33] Jack White and Adam Sandler were both rumored to play a pair of the Basterds at one point. 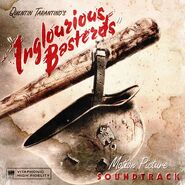