“So I grew up with this psychotic hatred of the Nazis and just these fantasies of killing them… It was very cathartic, it was extremely personal to do the role… So there is probably a lot more of me in Donny Donowitz and Donny Donowitz in me than I would care to admit.[1]”
―Eli Roth

Eli Raphael Roth (born 18 April 1972, Newton, Massachusetts, United States) is an American film director, producer, writer and actor. He is best known for directing the horror film Hostel (2005) and its sequel, Hostel: Part II (2007), and for bringing back R-rated violence to horror movies at a time when studios would only make PG-13 films. He is also known for his role as Donny "The Bear Jew" Donowitz in Quentin Tarantino's Inglourious Basterds (2009), for which he won both a SAG Award (Best Ensemble) and a BFCA Critic's Choice Award (Best Acting Ensemble). Since then, he worked as producer in many TV series and documentaries, as well as horror films. 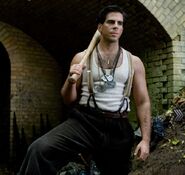