“You probably heard we ain't in the prisoner-takin' business; we in the killin' Nazi business. And cousin, business is a-boomin'.”
―Aldo Raine

1st Lieutenant Aldo "The Apache" Raine is an American lieutenant and the leader of "The Basterds", as well as one of the main protagonists of the film.

A hillbilly-moonshiner from Maynardville, Tennessee, USA, Aldo bears a large scar around his neck which is rumored to be from an attempt lynching, while fighting the KKK. Aldo's nickname "The Apache" comes from his penchant for scalping Nazis (done in the tradition of American Apache Indians). In his introductory scene, Raine states that he is a direct descendant of legendary mountain man Jim Bridger and that he's part Native American.

Aldo Raine is first seen talking to a group of soldiers in a yard. He introduces himself as Lt. Aldo Raine and claims that he needs 8 soldiers, 8 Jewish-American soldiers to be exact. He tells them that there are rumors about an armada waiting to happen. However, they will be leaving a little earlier. He tells them that they'll be dropped into France and there, dressed as civilians, they'll be doing one thing and one thing only: killing Nazis.

Some time later we see private Butz telling Hitler how they were ambushed by Raine's men. Aldo calls Sergeant Werner Rachtman and asks him if he knows who Hugo Stiglitz is. Afterwards, he demands that he tell him the positions of the other German soldiers, also what weapons they have and how many of them there are. Rachtman refuses and Aldo calls "The Bear Jew" aka Sgt. Donny Donowitz to beat him to death with his baseball bat, as he eats a sandwich. Afterwards, he tells Donny to bring Butz to him to point on a map the location of the other German unit. After Butz tells him what he needs to know, Aldo pulls his knife and gives him a swastika-shaped scar. From a trunk shot, we see Donny telling Aldo that he's getting pretty good at that. Aldo confirms that, saying that it's just practice.

Aldo meets with Lt. Archie Hicox in a ruined house in the village of Nadine, where they're supposed to meet with their contact, the German actress Bridget von Hammersmark. Here, Aldo is angry that the rendezvous place is a basement. Hicox tells him that it's actually a tavern, to which Raine replies that it's a 'tavern alright', but in a basement. He adds that fighting in a basement is a problem, to which Hicox replies that she wasn't looking for a place to fight, but a place isolated and without Germans. During the rendezvous a shootout occurs, leaving everyone in the tavern dead except von Hammersmark and a German soldier named Wilhelm. Aldo successfully bargains with Wilhelm to let them take von Hammersmark. After Wilhelm drops his weapon, von Hammersmark guns him down. With the German speaking members of the Basterds all dead, Aldo decides that there's no other choice but for him, Donny, and Omar to attend the premiere in their places, posing as von Hammersmark's Italian escorts.

During the film night, Aldo attends the premiere with von Hammersmark, but Hans Landa speaks to them and sees through their disguises. Hans then kills von Hammersmark and has Aldo captured along with another Basterd, Utivich. Hans then negotiates his surrender with Aldo, and the missions goes as planned, with the cinema blowing up and the Nazi High Command being killed, possibly ending the war. At the end, he kills the German driver while sparing Landa. He then carves a swastika on Landa's forehead as he screams in agony. He states to Utivich "This just might be my masterpiece."

Aldo Raine is a violent, brutal, apathetically cruel, intelligent, and patriotic individual who has no qualms about committing mass murder and openly mutilates Nazis with a gleeful grin and consistent conviction. He is also straightforward, fearless, and charming. Aldo Raine’s steady leadership is at the heart of all the Basterds’ successes. He cares deeply for his men, but is a soldier first and foremost. Although Aldo exhibits kindness and decency to all non-Nazis, his hatred for the Nazis is intense and sadistic. He takes special pleasure in carving swastikas into the foreheads of living Nazis so they can never deny their connection to the 3rd Reich.

He also expresses remorse towards German civilians and workers.

Aldo Raine and The Basterds.

Aldo looks at Hicox and Wicki.

Aldo sends the doc away.

Aldo tries to fool Landa with his Italian.

Aldo and Bridget are nervous.

Aldo about to be taken down by the guards.

Aldo about to headbutt Landa.

Aldo with Utivich in the truck

Aldo tells Landa where here's from.

Aldo unties his bow tie as he hears Landa's demands.

Aldo talking to the OSS commander.

Landa and The Basterds in the woods.

"I'm going to give you a little something you can't take off." 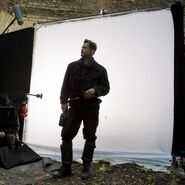 A photo of Aldo Raine stylized as a period piece.